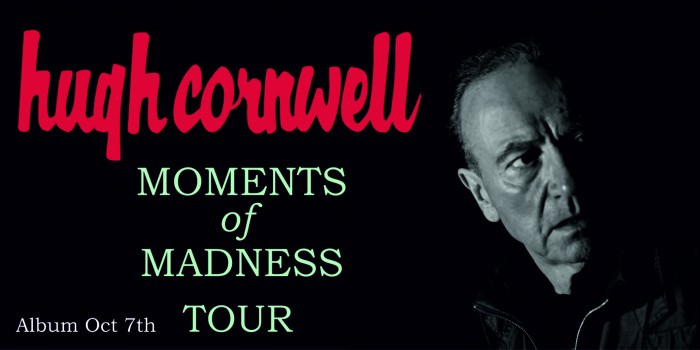 Hugh Cornwell returns with his sensational and highly anticipated tenth solo album Moments of Madness with ten outstanding tracks that are set to stun. The album is released on Friday October 7, 2022. The album is available to pre-order from https://hughcornwell.tmstor.es/

As leader of The Stranglers, Hugh was the main songwriter of all the band’s most memorable songs across ten stellar albums. Their 1977 debut Rattus Norvegicus – featuring seminal songs Peaches, (Get A) Grip, (On Yourself), and more – follow up albums No More Heroes, Black and White, The Raven and The Gospel According To The MenInBlack - which Hugh cites as his favourite Stranglers album – consolidated Cornwell’s stature as a unique songwriter and musician. His lyrics to Golden Brown, from the La Folie album, and their multiple meanings, is a songwriting masterclass with the song reaching number 2 in the UK singles charts. After releasing his final album 10 with the band Hugh embarked on a solo career.